I'm linking up with Life Rearranged to share the story behind some instagram pics today.  It has been a while since I shared photos, but hopefully I will be sharing more in the next few months. 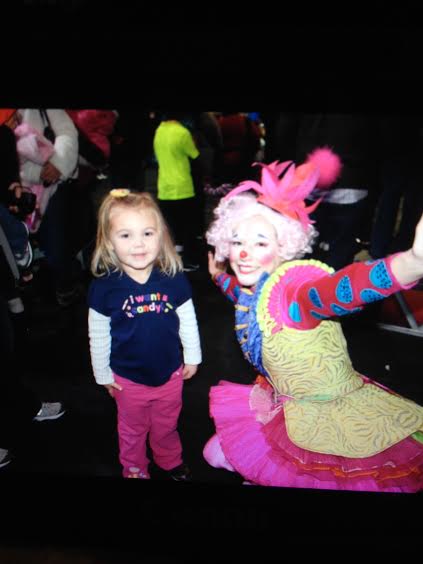 Delaney was able to go to the Barnum and Bailey circus in December.  Her favorite part of the circus was probably the giant snowcone in the elephant cup that cost too much money.  She was also slightly obsessed with the "purple" clown.  I realize she is more pink, but she gets her colors confused. 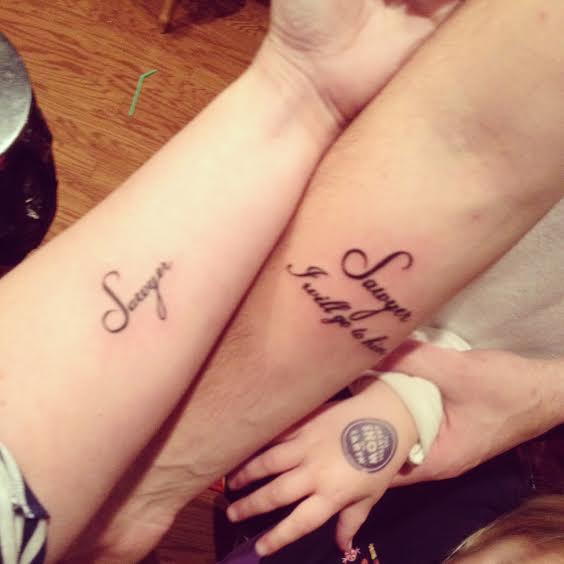 Our baby boy was "born still" October 10th- I will be honest- I don't like that phrase.  Something about it, I don't know, I just don't like it.  Maybe I feel like it is sugar coating the reality of the situation.
Anyway, right after Sawyer died, we knew we wanted to get tattoos.  Luckily, we decided to get them the night of the circus, so Delaney had her own tattoo to share, which says "the greatest SHOW on EARTH".

We wanted "I will go to him", which is part of
2 Samuel 12:23, which describes how David feels after his new baby dies.
"But now that he is dead, why should I go on fasting? Can I bring him back again? I will go to him, but he will not return to me."
It is just a reminder that our baby WILL be in heaven and we will see him again.

The tattoo artist couldn't fit "I will go to him" on my arm, since I didn't want it taking up the entire arm.  So, I just went with his name and eventually, I will probably put the verse on my other arm.  On a lighter note, the tattoo artist's name was Boner.  When I texted my mom in a panic right before it was my turn, the conversation went like this

That definitely helped my nerves and the tears that accompanied them. 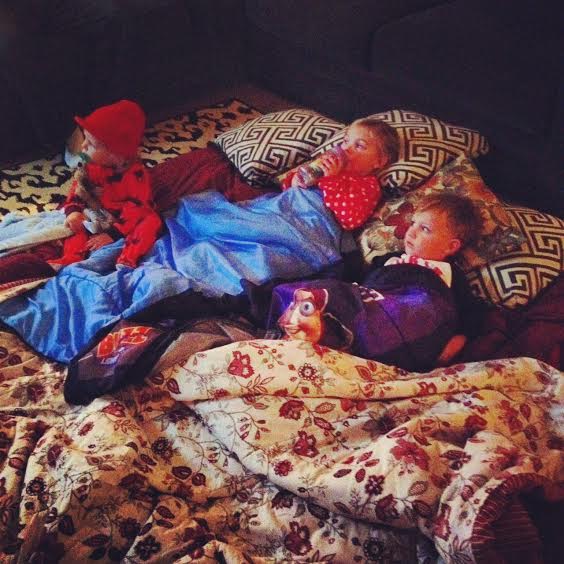 Delaney had some much needed cousin time when her Hawaiian cousins came to visit over Christmas.  Mark's brother and wife live in Hawaii, so we don't get to see them very often.  They had an absolute blast, including a movie night.  They lasted at least 30 minutes before they were ready to get up and play... 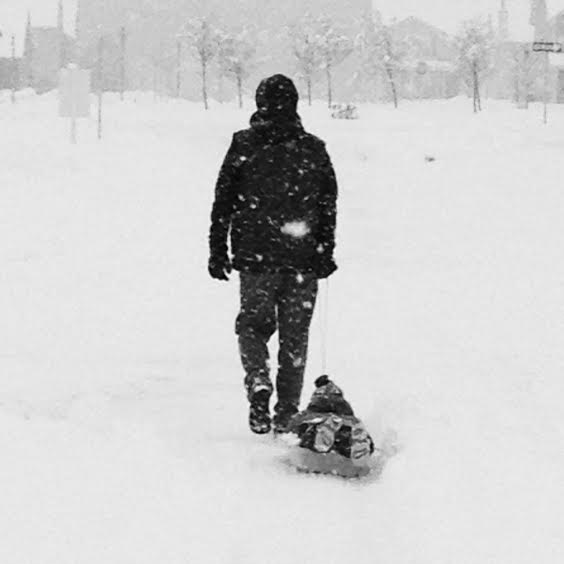 AND we live in Indiana, so we dealt with THIS last week.  This was the beautiful day of 12" of snow when we were able to play and sled.  The next day, the temperature dropped to -14 or so...we didn't leave the house for a few days.  I then developed cabin fever, and almost died from it. 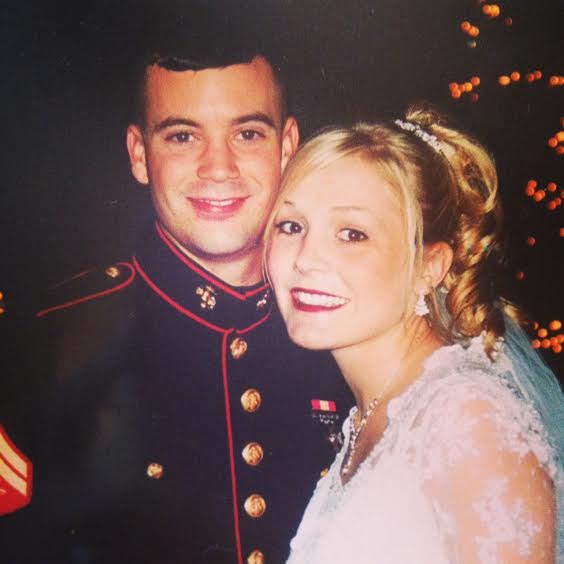 Mark and I celebrated our 10th anniversary a few weeks ago!  I was married at 19, but it was more
common back then...oh wait, no it wasn't. at all.  We've moved five times, dealt with a deployment to Afghanistan, both graduated from college, held multiple jobs, suffered a miscarriage, gave birth to a BEAUTIFUL baby girl, and are currently dealing with the death of our stillborn baby boy.  We've had a lot happen in ten years,  but we look the exact same as we did in the picture...just humor me. 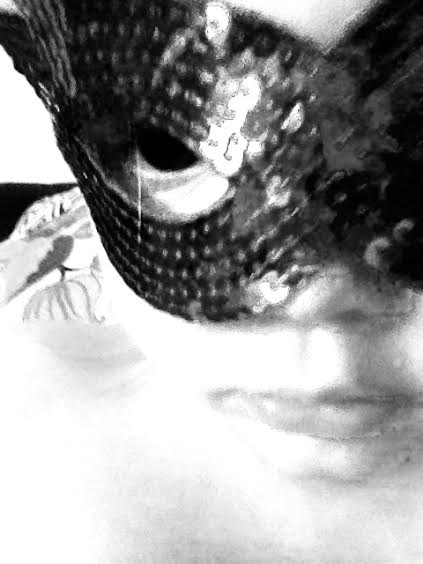 I can't get over the beauty of this picture.  Delaney was wearing her hot pink Mardi Gras style glitter mask and was playing with my phone.  I found this photo today- she somehow put on a black and white filter and snapped this selfie. Even though her eyes are black, there is something about it that I love.

A Christmas cow and a Public Service Announcement

Well, the holidays are over, my tree is down, and the fake pine needles have been vacuumed off the floor.  This was the toughest Christmas I have ever experienced.  After Sawyer died in October, I wasn't really sure if I wanted to put up a tree or buy any presents.  However, when the time came, I found that I was still able to decorate and get ready for Christmas.  I wanted it to be fun for Delaney.  I absolutely love the Christmas season and I wanted her to see the joy in celebrating Jesus.

Towards the beginning of December, we received a letter that really helped me keep our Christmas in perspective after such a tragic time.  Mark and I signed up to sponsor a child through Compassion International early last year.  I chose to sponsor a little boy who had been waiting the longest, named Ishimwe.  I write letters to him, although with the busyness of life, I don't write as many as I would like to. 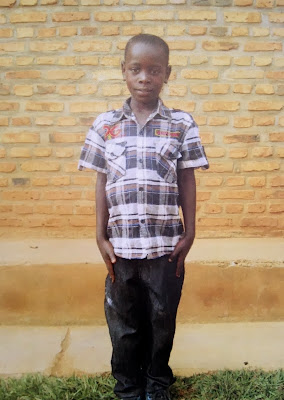 After everything that happened with Sawyer, I was not exactly in the Christmas spirit.  However, I knew I needed to send Ishimwe a gift for Christmas.  The gifts have to be monetary, so I talked to Mark about it, and we sent a gift for the amount that we would have spent on Christmas gifts for Sawyer.  I will be honest- it wasn't what I considered a lot of money.  I don't spend a LOT of money on Delaney for Christmas.  I think I bought her 5 or 6 new toys and I bought them on sale, mostly with Kohl's cash. 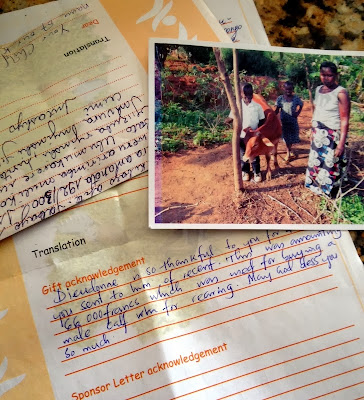 In mid-December, I was having a really rough day.  I had cried a lot that day.  Mark walked in from work with the mail and I saw that I had a letter from Compassion International.  I opened it to find a letter from Ishimwe and a photo.  I looked at the picture without really studying it and began reading the letter.  I read through it somewhat quickly.  He is 10, but his letters are always written by an adult and translated by another adult.  Therefore, sometimes I feel like they are a little "detached" -it is evident that an adult is sitting next to him asking him questions so that he can "write" a letter to me and often the translation is a little rough.
Mark was reading over my shoulder and when we got to the end of the letter, I gasped and Mark said, "HE BOUGHT A COW!" and I was immediately crying, but different tears.  The end of the letter stated: "[he] is so thankful for you for the gift you sent to him of recent...which was used for buying a male calf with for rearing.  May God bless you so much."

I don't know what I expected him to buy with the money.  He is from Rwanda.  I knew it wouldn't be a Transformer or a Skylander, but I thought maybe a soccer ball, a book, and new pair of shoes.  Or maybe Compassion International would have some "toys" that they could buy with their money or something.  That is how American I am.  But, no.  He bought a cow.  This sweet 10 year-old boy didn't buy a new video game for his XBOX or a new pair of Nikes.  He bought a cow.  I am sure it was a family decision.  He might not have not wanted to buy a cow with his Christmas money, but after looking at the picture a second time, I could see the joy that the cow brought for him.

The child on the left is Ishimwe.  I suspect it is his sister in the middle and his mother on the right, although I cannot be certain.  and the cow.  This 10 year-old's Christmas gift with the money that I really didn't think would go very far. 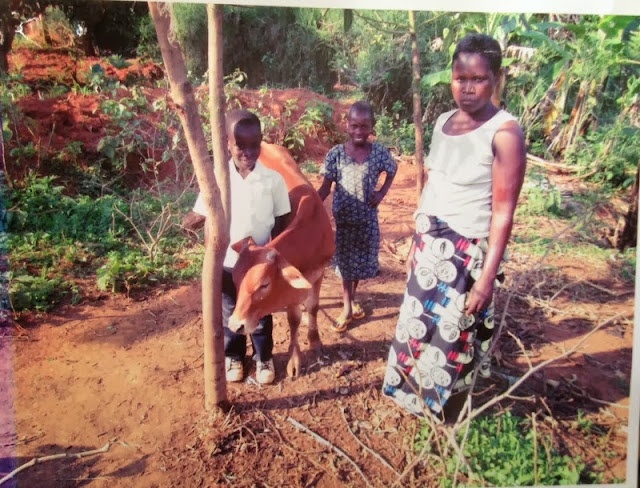 I don't write this to say look what we did for him.  I just wanted to share that during a day that I was broken, God gave me encouragement through this child I have never met.  Now it is time for the public service announcement.  I know there a lot of times where you just don't have an extra $38 a month.  I get that.  I try to think of ways that I can cut that money out of my own budget to help support Ishimwe and his family.  It is about the cost of two new sweaters (on sale) a month, one pair of jeans, two family meals at Chipotle, or one meal at Outback.  It is the price of one date night at a movie theatre with concessions.  A little bit of money can go a long way in countries like Rwanda.  If you are interested, Compassion International is a great, faith based organization and it is so easy to sign up.

Christmas was still hard.  But thinking of this photo of this little boy and his Christmas gift helped bring me joy when I was hurting.  I think whenever I buy Delaney any gifts, I will always be reminded of a child who bought a cow for his family with his Christmas money.

Thanks for stopping by:)

Welcome! I'm Kelsey- co-owner of Tag...You're It Jewelry. TYI began in 2009 and has grown to be a family business. This blog includes new updates, products, and sales for TYI. It also includes the day-to-life of being a WAHM and balancing being a wife, mom, and small business owner. I'm so glad you're here!